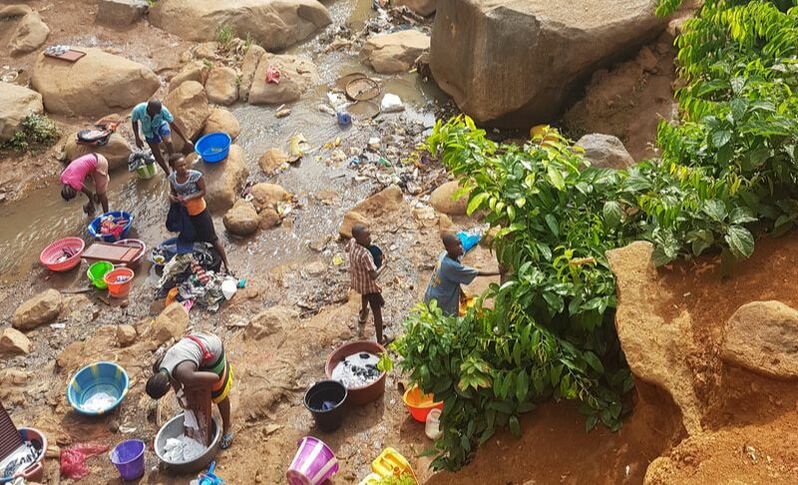 Waste management problems, poor quality of shelter, precarious livelihood options and limited healthcare access drive the poor living conditions in informal settlements that directly impact residents’ health outcomes. Women, children and the aged are thought to be more vulnerable than men, and in the event of sickness or injury most residents administer self-treatment or consult informal providers as a first option, and tend to use formal care if and when that fails.

Up to now there had been a significant research gap in the understanding of social and environmental determinants of health in informal settlements in Sierra Leone. It is in this context that SLURC has undertaken a two year research study in partnership with Future Health Systems (FHS), investigating how living conditions in four of Freetown’s informal settlements relate to the health concerns of their communities. The findings and recommendations are now available, following a launch event in Freetown in January 2019.

Following a scoping study which established the evidence gaps surrounding urban health in Sierra Leone, SLURC launched its research project in Freetown, exploring the links between human health and the living conditions in informal settlements. The findings of the scoping study provided a roadmap for the main research.

Participants from across the different stakeholder groups came together for a validation workshop in November, to discuss and corroborate the research findings. There was lively discussion between stakeholders, particularly about the barriers and deterrents people face to accessing healthcare. For example, many perceive a lack of confidentiality from formal healthcare workers. Also apparent were the commonalities in experiences across different settlements, yet also the place-specific aspects to many issues.

Findings and recommendations were also taken out into the four communities studied (Cockle Bay, Dworzark, Moyiba and Portee-Rokupa) in order to obtain as wide a range of feedback as possible.

As well as the scoping study, research report and policy brief, SLURC worked with FHS to create shorter ‘issue briefs’ on three of the key issues that emerged from the research – water and sanitation, waste management and healthcare accessibility. Findings and recommendations were presented to community members, health workers and policy makers at January’s launch event, where copies of the publications were also distributed. Everyone was given the opportunity to respond to the findings, and representatives of the Federation of the Urban and Rural Poor (FEDURP), Freetown City Council (FCC) and the Ministry of Water Resources all discussed opportunities for creating synergies between what each is doing to improve environmental conditions.

SLURC has also trialled dissemination of compressed versions of the outputs via Whatsapp for this project. Freetonians are heavy Whatsapp users, for sharing and disseminating of all kinds of content through their multiple networks. This is an important channel that we will seek to utilise more in the dissemination of SLURC outputs.