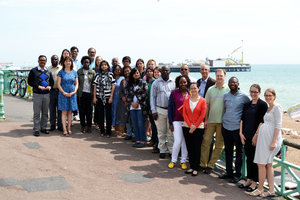 My guess is that the first two dates will ring a bell for those with a passing knowledge of ‘global health’ and the third will make you scratch your heads. This year we celebrated the 40th anniversary of the the Alma-Ata Declaration of 1978, which established primary health care and community involvement as core to the achievement of ‘health for all’. Whether the goals of Alma Ata are ‘still relevant’ was a hotly debated topic at the biennial gathering of the Health Systems Global community in Liverpool. Just weeks later in Astana, yet another global gathering of health folks marked the anniversary with a reaffirmation of ‘the fundamental right of every human being to the enjoyment of the highest attainable standard of health without distinction of any kind’. In ten years time we will mark it again, using the moment to consider what progress has been made (or not) towards this grand goal of a universal human right to health.

It was an in-between time. The Millenium Development Goals had been declared and a whole new swathe of health interventions were underway to push in the direction of reaching them. There was discontent brewing amongst those who had worked through the structural adjustment reforms, economic crises, and the concomitant unravelling of post-colonial health systems infrastructure in Africa and South Asia. It was in this context, in July 2004, that a small group of health systems disruptors got together at the Institute of Development Studies in the UK to challenge ‘business as usual’ in health planning and service delivery, and to do their bit to steer the future of health services for marginalised and vulnerable populations in a new direction.

Between August and September this year, in anticipation of the looming Alma Ata anniversary and declaring of an Alma Ata ‘2.0’, I reached out to the original leaders of the Future Health Systems research consortia. This fourteen-year collaborative effort, funded by the Department for International Development and working across ten countries, was what came out of that inception meeting in July 2004. I wanted to understand what it was that this original group thought the future of health systems might look like from the vantage point of 2004, and why they committed to a ‘learning by doing’ and decentered approach to problem-solving after several decades worth of vertical health interventions.

So what did I learn? To begin with, that these in-between times are highly relevant to understanding what drives innovative thinking and change. For those who participated in that July 2004 meeting, which included David Peters, Gerald Bloom, Hilary Standing, Abbas Bhuiya, Barun Kanjilal, George Pariyo, Zhang Zhenzhong among others, there was a sense in these first years of the 21st century that the models and modalities of international public health intervening had calcified. The rigid dualistic public/private divide was not an accurate reflection of health systems realities. Pluralism reigned. Change was coming – new technologies, new global powers, new partnerships – and a new way of doing things was required.

They called themselves ‘Future Health Systems’, not from an outsized sense of their ability to manifest the health systems of the future, but rather to situate their efforts in what they understood was a dynamic, complex and constantly changing landscape of health actors and health challenges. With notably flexible and sustained support from the UK’s Department for International Development, this consortia took seriously a ‘feeling the stones in the river’ approach to reaching this imagined future, rather than the vertical control that had proved so disastrous in the past.

A decentered and mutual-learning approach does not sound so impressive taken out of historical context, but it is crucial to remember that in the 1980s and 90s the ‘business as usual’ approach to health sector reform was technical and managerial, utterly failing to acknowledge the wide range of knowledges, local perspectives and relationships of power that would ultimately contribute to health systems change. Thus, the FHS model of learning-by-doing and ‘unlocking community capabilities’ enabled what would become a genuintely collaborative and locally-grounded effort to test and develop innovations in response to the real needs of disadvantaged groups.

Why does this one little research consortia matter within the grand sweep of global health history, and the ongoing ideological and political battles over what ‘health for all’ means and how to achieve it?

Of course, there are the concrete successes and substantial new knowledge generated in the course of 14 years. However, I leave this tallying to official reports and the formal evaluations.

The value I see is found precisely in the in-between moments of standard chronologies of global health. It is a value that is revealed by paying attention to the more nebulous aspects of collaboration and research partnership, rather than the more dominant methods of measuring impact. What emerged clearly from the interviews with core members of FHS, is that it was in fact the decentered nature of the research consortia and the explicit focus on ‘learning by doing’ that enabled them to engage with complexity in health systems instead of hiding from it. The inception meeting in 2004 was one moment in what was for each of the individuals involved a much longer trajectory of wrestling with the limitations of one-size-fits-all health planning models, but it nonetheless marked a change in direction.

This consortia put into their very name a reminder that nothing is constant in a constantly changing world. The future is forever ‘out there’ and the future of health systems is something that we will continue to chase. The promise of ‘health for all’ remains unmet, but the promise is also the thing that continues to drive this effort forward. For me, the story of FHS is hopeful. In coming together that first time in that sweaty room in IDS in the middle of a hazy English summer, this particular group of health systems disruptors set into motion something that had material impacts on the lives of those involved, and on the lives of those their work touched. In feeling the stones for the river, they took that first step, and the people in that room made an explicit choice to develop a way of working that was different to what they had done before.

As we mark the first UN-designated International Universal Health Coverage Day, less than two months after another anniversary of Alma Ata, and a revised declaration of intent, maybe what we need to realise is that sometimes a next step is simply one more stone, but sometimes it is the start of a whole different path. An iterative and process-focussed approach that is open to complexity, to dynamism, to innovative ways of learning and doing was – in 2004 and in the field of public health – a brave choice.