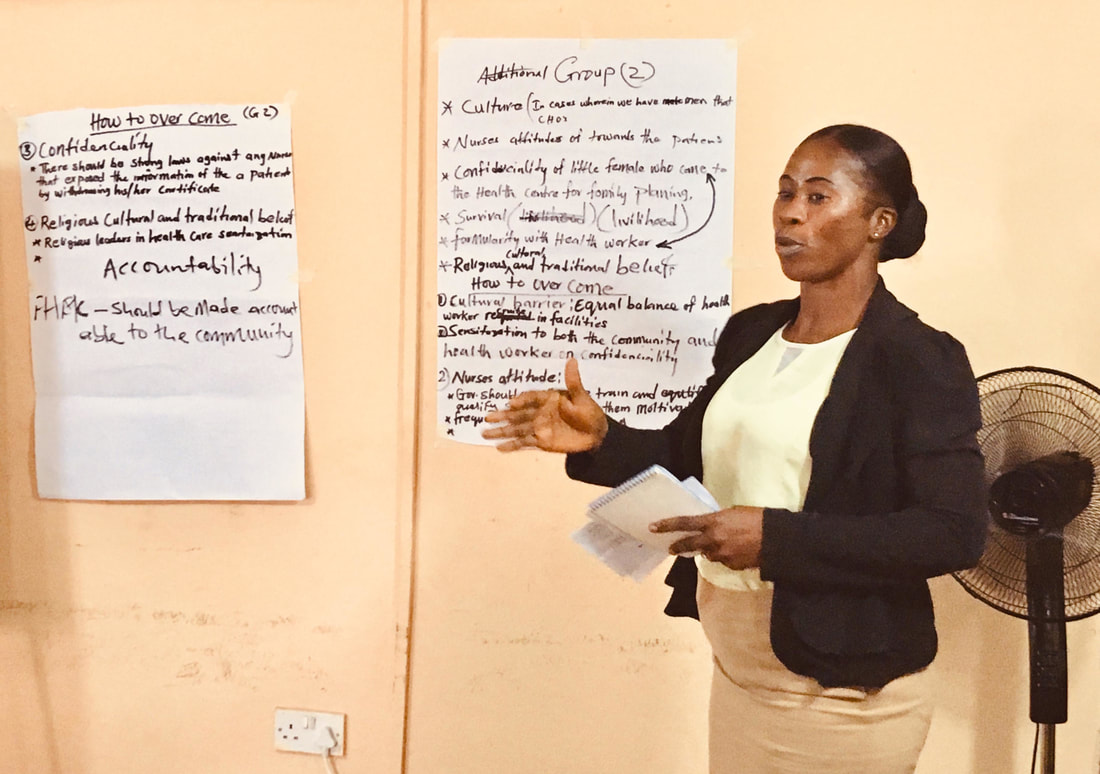 The poor health of those living in informal settlements across Freetown is a direct consequence of their living conditions, but often in locally specific ways. This is further exacerbated by unequal access to healthcare, meaning such communities face a double burden on their health due to the environmental conditions in which they live.

On 22 November 2018, a group of 30 community stakeholders, health professionals and policy makers came together at the Sierra Leone Urban Research Centre office in Freetown to validate the initial findings. This was an opportunity for participants from the four communities involved to discuss and validate the research findings, include any additional information that may not have been covered so far, and provide a platform for dialogue between community stakeholders and local and national government representatives around the issues raised and the ways in which these might be addressed going forwards. Following initial presentations by SLURC’s Dr Joseph Macarthy, Abu Conteh and Sudie A. Sellu, consolidating findings from focus groups and interviews, participants broke into groups to discuss and record their feedback and further ideas, before sharing these with the whole group. This was the first time all stakeholders had come together in such a way.

We have also held a similar validation exercise within the four communities of research, to get further views on what has come out the research so far. These included members of the wider community who had not yet participated in the research.

Many health issues in informal settlements are place-specific

It was clear from the initial research findings that there are many crosscutting issues affecting health across all the informal settlements included in the study, such as toilets, water, housing and energy use. Yet, within each of these issues, place is instrumental in driving the specific health conditions affecting each community. In Portee-Rokupa, residents travel huge distances to obtain water; in Cockle Bay, water is relatively available, yet some of the sources are contaminated by saltwater.

In discussion, the groups added other specific examples of the specificity of health conditions in their communities. In the hillside settlements of Dwarzark and Moyiba, accidental falls are a concern due to the terrain. Blindness is more of a concern in the seaside settlements (though causes are differentiated by gender roles - among women it is attributable to excessive smoke exposure through drying fish, while fishermen are exposed to salt water while fishing. A gender perspective has been crucial to the project – the research has found that men are more likely to use informal healthcare than women, for example. Participants shared other issues affecting all communities alike, such as strokes - believed to be prevalent due to physical strains, stress and irregular medical check-ups – and fistula - due to forced or obstructed labour caused by some inexperienced Traditional Birth Attendants.

When it comes to seeking treatment for ill health, findings from the focus groups established a range of barriers that those in Freetown’s informal settlements face when accessing healthcare, which the research team grouped into five main categories: long distances, difficult terrains, poor roads, long wait times, and the main factor - high costs. These were all corroborated by participants, and explain many of the decisions people make in how they access healthcare.

There was much discussion of social barriers, for example the role of religious and cultural beliefs, coupled with gender imbalances in health facilities in preventing some from accessing formal care. Healthworkers breaching confidentiality is another significant barrier – for example, to young women seeking family planning services.

Nurses’ attitudes were perceived by many to be negative, putting people off seeking their care – though it was acknowledged that this might sometimes be due to high workload, lack of formal enrolment and thus low motivation.

“Healthworkers are taught on the ethics of nursing on the issue of confidentiality, but there is a need for refresher training so that nurses stick to the ethics of their profession. If nurses refuse, it should result in retrieval of their licence” (health worker)

The range of participants present together in the room provided the opportunity to productively establish concrete steps towards addressing some of these barriers. Health worker recruitment should consider gender balance, ensuring that women and men are not reluctant to visit health facilities. All healthworkers should receive ethics training, ensuring patient confidentiality for people seeking care – and this could perhaps be accompanied by strict penalties for those who breach confidentiality. Greater recruitment of trained health workers would reduce the workload and thus boost motivation among those already working. Finally, inclusion of religious leaders in health sensitization activities is suggested as a positive step. In short, along with addressing the environmental factors, priority must be given to boosting accountability across all healthcare services accessed by “Freetonians” to make it more accessible and responsive to their needs.

The full report is due for publication in December.

(Quotes are all translated from Krio)