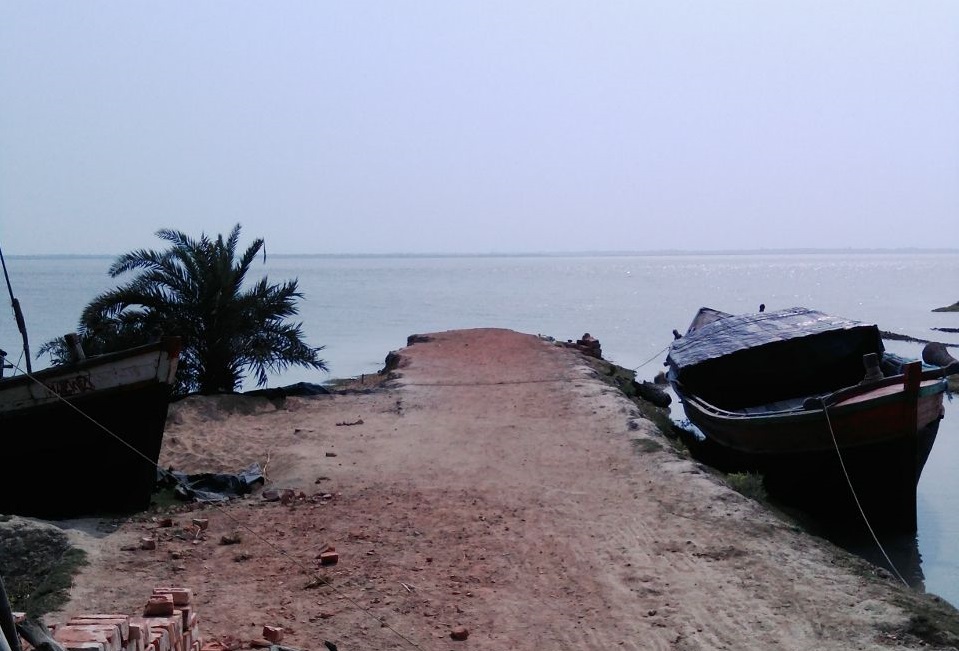 We set out to leave for Ghoramara - one of the islands of the Sagar block of the Indian Sundarbans in the southern part of West Bengal - as a part of the IIHMR University – FHS study on climatic uncertainties and child health. As I sat in the bottom deck of the ferry travelling the hour long journey from Kakdwip to Ghoramara, I began to read the documents shared by the Panchayat on the island. The island, home to a population of 5000 people, is surrounded by rivers from all corners. It has no primary health facility but a sub-centre and ten anganwadi centres. It is popularly called the sinking island because the rising sea levels due to global warming and climatic events had leached a major portion of the island in the last few decades. A report by Centre for Science and Environment stated that over 25 years, Ghoramara’s land mass has been eaten away by the advancing sea – from 9 sq km to just about 4.7 sq km. I wondered what it meant for people living all their lives in a village and watching it gradually leach out.

As we approached the ghat (ferry ghat point) the boat began to cradle aggressively due to strong winds, leaving many in our team badly nauseated; for the local people, however, it was just another day. At the ghat, a narrow slab of wood was thrown on deck and people gradually began to get down. As I looked around I saw a vast spread of marshy land with intermittent pits dug up, for the mud to build embankments that weren’t very resilient to begin with. There was no point to get down from the boat, except for half of the wooden slab resting on the muddy coast of the island. I reluctantly walked on it like a novice tightrope walker. When I looked down to see the waves splashing against the coast with mud falling off on impact, I wondered ‘Is this what they mean when they say the island is dissolving?’

Vulnerability took a whole new meaning in the coming weeks of our field work here. Yes, like many places in the Sundarbans, Ghoramara, too, was highly inaccessible. Not only was it almost an hour from the nearest town – Kakdwip - the village had no pucca roads. More than once we encountered pregnant women being hustled in the scorching afternoon heat, walking on the uneven brick roads towards the boat ghat. Many households preferred home deliveries for this precise reason. We were later told that the boat services stall in monsoons and during low tide, leaving people stranded on the island during that period. Climatic events were unpredictable and harsh with extreme winds, cyclones and flooding during monsoons. The immediate after-effect of which was embankments breaching and flooding in the area.

The uncertain climate has not made livelihood any easier for the people. In households with children below six years of age, the primary bread earner did more than one job in a year, mostly non-agricultural labour work like digging pits, making bricks, construction etc, as and when it comes. People did not have much land for cultivation and the land that they did have they used for cultivation of beetle leaves. In occupations like fishing and non-agricultural labour the breadearner lived outside the village for more than six to eight months in a year, creating an uncertain economic situation in households with primarily women and young children. One of the women reported ‘When there is an emergency the news can’t be sent to my husband immediately. By the time he gets the news and arranges for money it gets very late. If my father-in-law leaves for any reason I cannot manage alone’. Money doesn’t reach them in time and so they rely on a loan from extended family or money lenders for running the households. The challenges were, in so many ways, complex if a child got sick. The geographical impediments, economic uncertainty and lack of support left many women delaying seeking child care, sometimes foras long as a few weeks.

We wanted to see how these contextual factors affected their access to food. Households did not have sufficient food for consumption and food quality was low with very little diversity. During extreme climatic events, borrowing food grains or money to buy food is an extremely common coping mechanism. Children are the most vulnerable segment of the population and in these geo-climatically vulnerable places, caregivers jump through hoops to ensure that the children get adequate food and health care. In one of the interviews, a family member reported that he went without food for a couple of days when there was no food, so their children did not starve. In such a trying and unpredictable environment, local informal health providers are sought for child health care services.

Over the two weeks that we were in Ghoramara, we regularly heard stories of people losing their lands and homes due to climatic events. In one interview, a household member said ‘We had a house near the bank, but due to cyclones and flooding we lost it. We also lost the land that we owned. We have now moved to the interiors. We still live in a kuccha house, as we see no point in investing in building a house in a place that is so uncertain.’ They were one of the many households that had moved in the last five years from the periphery to the centre due to violent storms and floods that washed away land and homes. Unlike other parts of the Sundarbans, where seasonal climatic events and floods have only rendered lands saline and barren, this region is also losing its land mass. It seemed possible that Ghoramara, much like its neighbouring regions Lohachara and Khasimara, might disappear into the sea. The population here seems to be battling an inevitable doom with a fast contracting land and rapidly shrinking opportunities to survive. I hope that when we do sit down to crunch the numbers and triangulate the data, we have a better understanding of a very visible uncertainty looming in the region. There is no denying the fact that there is an immediate need for responsive measures to ensure the future of the existing population in this fast sinking island.