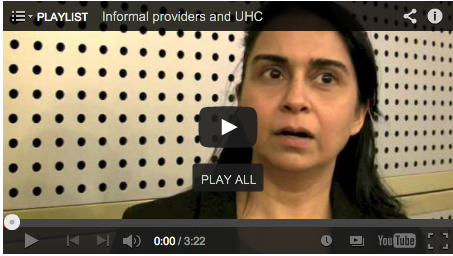 Are informal providers a dangerous detour on the road to universal health coverage?

At the Second Global Symposium on Health Systems Research, the unifying theme was 'universal health coverage' (UHC). A commitment to achieving UHC was enshrined in the Beijing Statement, and much discussion at the symposium targeted the post-2015 agenda with one health goal.

But the road to universal health coverage is long, and the devil is in the details. Human resources for health is critical in meeting the access element of universal health coverage, and working with informal providers to improve care is one way of bolstering the health workforce. Some, however, argue that working with informal providers in the private sector is a dangerous distraction from meeting UHC.

, however, were quick to point out the critical role informal providers play across health systems, especially one convened by the

Tom Feeny of HANSHEP blogged about before

In the videos above, several respondents challenge the notion that informal providers are a dangerous distraction. Dominc Montagu, of UCSF, for example, takes a pragmatic stance by suggesting that millions of people around the globe already get their health services from informal providers, and that 'their not going to change that just because someone has a vision'. Meenakshi Gautam, of the Centre for Research on New International Economic Order, India, stresses that primary care must be within a half-hour walk from the village, but that in India there are over 600,000 villages -- more than the number of formally trained doctors in the entire country. She suggests that informal providers are better placed to fill this gap. And Oladimeji Oladepo from the University of Ibadan gives an example from Nigeria where informal providers have played a key role in getting anti-malarial drugs to the rural poor at low costs.

[Editor's note: This blog and videos were originally co-produced by Future Health Systems and the Center for Health Market Innovations for the Private Sector in Health.